The RWD varsity hockey team saw its season come to an abrupt, heartbreaking finish just 21-seconds from the final buzzer at LeBahn Arena in Madison on Thursday night.

A heavy underdog, the Cheavers battled the host Madison Edgewood Crusaders even into the 51st 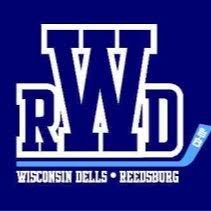 minute before the hosts counted a powerplay just 21-seconds from the final buzzer to move in front to stay at 2-1 in their WIAA Division 1, Section 3 Quarterfinal match.

Teams played through a scoreless opening period, the Crusaders outshooting RWD 12-7 and the home team hit the mesh for the first time 40 seconds into the middle frame.

Senior Thomas Pfaff responded a little more than three minutes later, scoring his team’s final goal of the season, from junior Danny Ely and sophomore John Thrasher. That wrapped up the scoring until the final minute. Sophomore goaltender Cooper Oakes turned aside 30 of 32 shots for the Cheavers who were outshot overall by a 32-22 margin.

The pain and heartbreak of such a game, throwing everything they had at the Badger South champs who ultimately built on an awesome 12-game winning streak propelling them into the Section’s final four should ultimately be an experience it can build off.

“It was a great game. We peaked,” said coach Neil Mattson in a telephone text interview the following day. “I can’t wait for next season.”

Indeed, the coach has an even more aggressive off-season schedule that will see them see them on the ice in Middleton regularly in both scrimmage matches and a tournament as well as what has become a traditional trip to Superior for bonding and more matches.

The Cheavers wrap up the season at 11-14-1 and Mattson remains just two wins shy of varsity career victory 300.

“I am proud of the seniors this year,” said Mattson. “They had a heck of a legacy with RWD.”

The Badger North is still well-represented in the WIAA playoffs as the Sauk Prairie Eagles moved to the Section 3 semi-finals with a 5-1 win on home ice against the Madison West Regents and the Beaver Dam Golden Beavers advance to the Sectional 2 semis as a number seven seed, pulling an upset over the host Fond du Lac Cardinals at the Blue Line Family Ice Center Thursday night. The Golden Beavers advanced to the quarters with a 6-5 edge against Appleton United on Tuesday night. The Golden Beavers will face Neenah/Hortonville/Menasha Rockets next week for a berth in the Sectional championship.

In Division 2, the Badger North Champion Waunakee Warriors have advanced to the Section 4 semis with a home win against Cedarburg Bulldogs. They will travel to Waupun for a shot at the Division championship game against the .