Three unanswered middle period goals were the difference for the Sauk Prairie Eagles varsity hockey team in a 5-2 win on the road at Sparta Youth Hockey Rink against Tomah/Sparta on Saturday (Jan. 9).

Otherwise, both teams added single goals in both the first and final periods and the Eagles never trailed in the contest.

Junior Erik Peterson opened the scoring 7:25 into the contest with help from sophomore Luke Mast, the home side responding with just under two minutes to play in the period as teams moved on to the second even at 1-1 despite a 10-3 margin in shots for the Eagles through the first 17-minutes.

Junior Micah Hanson gave the Eagles its second and final lead of the contest 1:41 into the second period and junior Hakon Peterson added two more to pad the lead before the end of the frame. Assists on the goals went to Erik Peterson, Hanson, Mast, and sophomore Ethan Tranel.

Tomah/Sparta pulled one more back with 8:50 to play in the contest, but if there were thoughts of a comeback, Erik Peterson put them to rest with the game’s final goal 49-seconds later, giving him back-to-back two-goal games and the forward has notched a pair in three of the team’s first five games so far. 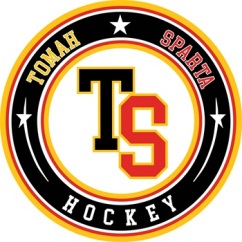 The Eagles held another lopsided edge on the shot clock, 15-4 in the second, but the visitors outshot the Eagles 8-7 down the stretch.

Sophomore Kaden Stracke picked up the win in goal for the Eagles who enter a big and busy week sporting a 5-0-0 record.

The Eagles are scheduled to host Badger North rival RWD (9-3) tonight at 7 p.m. and will stay on home ice for a visit from Baraboo/Portage Thunderbirds on Thursday night before wrapping up the week Saturday afternoon at the Onalaska Omni Center, taking on the La Crosse Aquinas / Holmen Avalanche.