This weekend’s USPHL Premier Midwest-West series between the Dells Ducks and Steele County Blades could feature a pair of teams looking to move up.

After missing the post season in 2018-19, the Blades improved to seventh in the nine-team division last season, finishing at 11-31-1-1 for 24 points, doubling its previous season’s finish.

The Ducks meanwhile dipped to 9-32-3-0 for 21 points and the eighth and final playoff position – the worst finish in the team’s nine-season history.

Both teams have a core of new faces in the lineup but will rely on the few returners to steer the ship.

For the Blades, Connor Lee, a speedy forward from Sydney, Australia, not afraid to throw his weight around made his presence felt in the team’s opening contest, scoring two of the team’s four goals on Wednesday as the Blades fell to the Minnesota Mullets 7-4.

The Blades held the edge in shots and owned an early 3-0 Mullets but couldn’t hold off the Mullets who took over the game’s second half.

The Ducks suffered through a baptism of fire on its opening weekend, outscored 20-1 by an experienced Chicago Cougars team that included five players from the 2019-20 Dells Ducks roster. However, Head Coach Shaun Falzone and Anthony Rohde said the experience could prove invaluable to a young Ducks team learning on the fly.

Defenders Cody Long and John Urgo both return to the Ducks blue line while Luke Marks and Adam Brown appear to be able to play defense or forward this season and Jerame Kennedy has looked good at the start of his second season. Also, in goal the Ducks relied on Isaac Hyde, a goaltender with previous USPHL experience, in the opening contest. 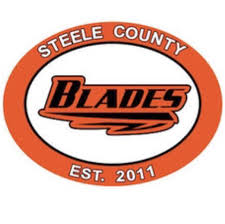 The newcomers played a role as well, Anthony Falzone turning in a brilliant goaltending performance through the first half of Saturday’s game and it was Jayden Tkaczuk notching the team’s first goal in his second career junior contest.

The Ducks are hoping to find a niche as a fast team not afraid of the physical play but found itself smothered at the offensive blue line often on its opening weekend.

This weekend could see a pair of thrillers with two teams close in their development stage looking to find their way to the win column.

Game time at the Lake Delton Ice Arena is 7 p.m. both Friday and Saturday night.