The Janesville Jets, including RWD junior forward Trevor Slaght punched its ticket to the quarterfinals at the 2021 Chipotle USA Hockey Tier II 18U National Championship tournament in Green Bay with a 6-3 win against the Igloo Jaguars Saturday afternoon. 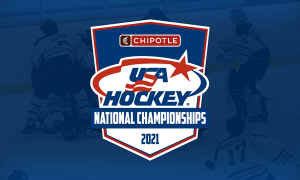 The win against the New Jersey-based squad at the Resch Olympic Pavilion, one of three ice surfaces at the Cornerstone Ice Arena in De Pere, not only clinched a spot in the final eight for the Jets but left them as the ‘Olympic’ Pool top seed as they collected eight of a possible nine points in three round robin matches. 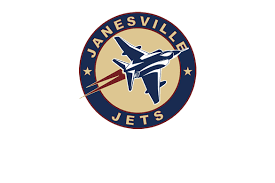 The game saw just 37 total scots on goal, 19-18 in favor of the Jets who carried a 2-1 lead out of the first period and expanded it to 5-1 in the middle frame with three goals in the first five minutes of the period.

Boone Mathison (’02 Tomah) paced the offense with a three-goal game and added an assist while Isaac Frenette (’02 senior Chippewa Falls) put together a third big game with four helpers. Slaght chipped in a goal and assist to match Adam Franken (’03 junior Oregon) and the other goal came from Mason Manglitz (’02 senior, Onalaska) who, like Frenette, contributed in all three contests.

John Schroeder (’03 University School) went the distance in goal for the Jets who move on to play the Cheektowaga Rec Hockey Warriors Saturday at 11 a.m. at the Hilliard/Weyers Arena, also at the Cornerstone complex.

The Jets moved through its round robin matches with relatively easy victories against both the Warriors and Pittsburgh Predators while showing amazing resilience battling back from one-goal deficit and ultimately capturing a 6-5 shootout against the Minnesota Moose to grab top spot in the ‘Olympic Pool.’ The Moose finished second with a 1-1-1 record.

The Warriors, playing in the ‘USA’ Pool finished in second, grabbing a 3-0 shutout in its opener against the Littleton (Colo.) Hawks Thursday before stumbling 5-2 against the Green Bay Bobcats Friday, then wrapping up the berth with a 5-1 win against Team Ohio.

The quarterfinal winner will return to the ice for a 6:30 p.m. match against either the McKinney (Texas) North Stars or Tri-Valley (Calif.) Blue Devils for a berth in the National Championship contest to be played at 11:15 a.m. Monday.